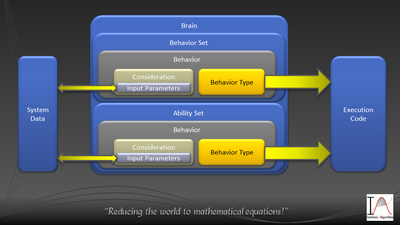 A Behavior defines not what a character will do, but why a character may do something. As such, a Behavior is the core component of the decision reasoning. As result, much of the work involved with creating and tuning character AI is done by creation and editing of behaviors.

However, it should be noted that a Behavior does not actually define the execution of the behavior–the actual action that it performs in the game. That is done by the associated #Behavior Type.